​One Montreal artist dies, another is born
Bill Brownstein, The Montreal Gazette, October 12, 2011

Jeanne Pope thought she had her life pretty much figured out eight years ago. Then Pope, a single mom who moved here from London in 2000, happened to be browsing through a secondhand bookshop on the Main. She literally bumped into maverick Montreal sculptor Stanley Lewis.

And so Pope's life was to change in ways she would never have dreamed. Pope, a therapist at a chiropractic clinic, was mesmerized by Lewis, who was almost as renowned for his philosophical views on the universe as he was for his art. Lewis and his work were to consume Pope long past his death in 2006.

Though she had never picked up a camera prior to meeting Lewis, Pope decided she wanted to become a filmmaker and focus on the sculptor. And so she applied and was accepted as a mature student in Concordia University's esteemed film-production program.

THE GAZETTE · Bill Brownstein · October 12, 2014
"Viewers get full and revealing access to a world that is rarely effectively penetrated. In the process, Pope and Galwey are able to demystify many aspects of mental illness and chip away at the stigmas associated with it."

THE SCANDAL MAGAZINE · Karl Ussakowski · October 22, 2013
Chez Lise leaves the audience with the impression that they are departing from the theater having acquired new friends. "

The life of Stanley Lewis was one of dedication for his art. He was still carving up to the last months of his life and making plans to update his sculptures in his studio. His last sculpture was determined by world events: The Avian Flue. He thought that his sculpture would even be more so appropriate because it was the Chinese Year of the Rooster. And he readily pointed to the Portuguese roosters on the Main. The one outside the Portuguese Restaurant, Janos, and those at Flor do Lar also on the Main. Alas, he never finished his sculpture of the rooster, which he named Bird with Mask. That Rooster with a Mask was no one other that Stanley Lewis himself.

What happened to Stanley in between his two Pink Ladies? 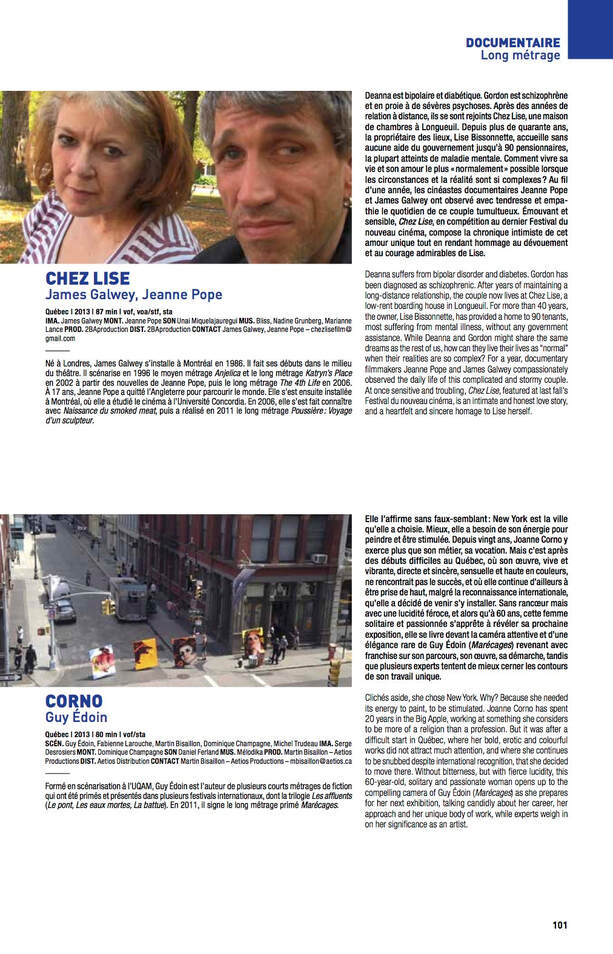 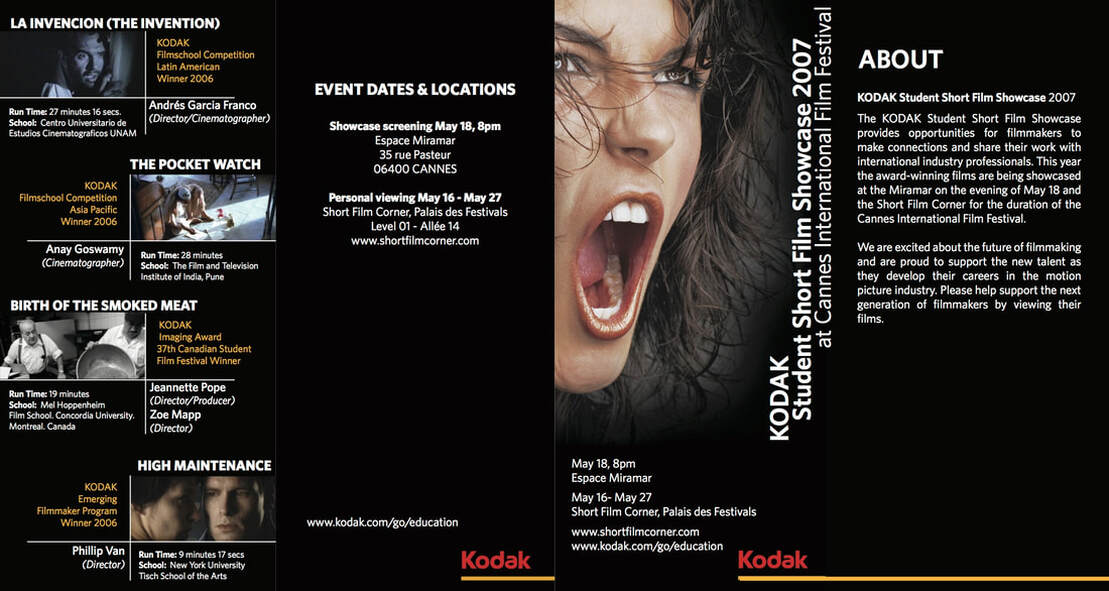 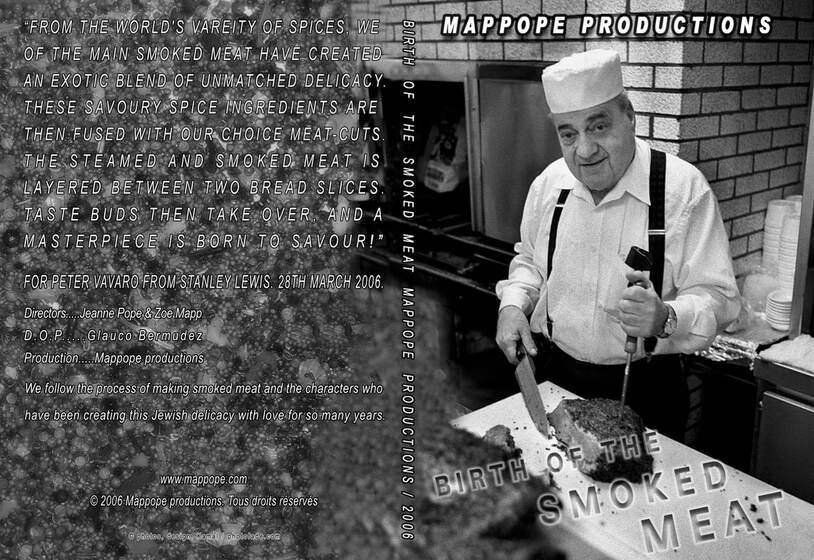 For Zoe Mapp and Jeane Pope, showing their short documentary “Birth of the Smoked Meat” as part of the Kodak Emerging Filmmaker Program at Cannes was an opportunity to display their cherished community to the entire world. “It exposed [us] to an international market, the likes of which I would never have access to in Canada,” Says Mapp. “We have since played our film in five countries since last year, all through having seen our work at the Short Film Corner,”  adds Pope.

“Birth of the Smoked Meat”, about the making of a Montreal delicacy, was made at the behest of the filmmakers’ friend Stanley Lewis. Lewis, a Montreal sculptor, was the subject of the filmmaking team’s first documentary “Where’s Stanley”. “He insisted we take on this project, which brought us the success we’ve had,” recounts Pope. The filmmakers even pay homage to his influence in “Smoked Meat”, as the food makes its way from delivery at the back of the restaurant to Stanley Lewis’ dinner plate.

Mapp and Pope’s third project, “Berson Boys”, concerns the art of headstone engraving in the oldest business on the Boulevard St. Laurent and completes the trilogy of films regarding this bastion of the Montreal community. Lewis lived above the Bersons’ engraving business, and the chronicle of their workday brings the tour around  Montreal’s culturally dense zone known as “The Main” full circle.

The area has been so inspirational to both Pope and Mapp, that Pope’s next project, an animated short titled “Up & Down the City Road” also concerns the gentrification and destruction “The Main” faces today. Since an animated project heavily relies on planning every image, Pope and Mapp used their documentary trilogy as an opportunity to capture the spontaneous reality as it took place. “The whole time we took chances as this was documentary, it was real time, no second take-we had one chance and that was that,” explains Pope, “we had to have ears, eyes and feet everywhere. We had to be very fast as well as balanced.”
Filming a documentary that encompassed the entire routine of the Bersons in a short schedule proved difficult, especially considering the sensitive nature of the Bersons’ work. “It was the close of the season,” recounts Pope, “the Boys, who work the session intensely, were very tired, we had to be very careful how we treated them as well as stay out of the way of grieving families…we only had four days to get what we could.” Continue to read
PRESS RELEASE – 2007
Kodak Rolls out Welcome Mat for Next Generation at Cannes
​
For five filmmakers, a chance to experience the 2007 Cannes International Film Festival was a dream come true. That was the overall reaction to their experience as part of the Kodak Emerging Filmmaker Program. The program is designed to provide an opportunity for students to showcase their talent, while meeting filmmakers, production and distribution executives, and peers from schools around the world. The annual Kodak Student Short Film Showcase was a highlight of the five-day schedule of activities in Cannes. Their films were also featured at the Short Film Corner section of the Marché du Film throughout the duration of the festival. The Short Film Corner publishes information about all the projects in the program. It also provides Internet access for viewing films at interactive kiosks. The filmmakers hosted by Kodak received reports that included who watched their film along with comments and contact information.

“This program is one of many initiatives by Kodak that are designed to help the next generation of filmmakers at the dawn of their careers,” says Wendy Elms, worldwide manager of Kodak’s Education Segment. “We are proud to offer this stepping stone for new talent, and to provide a venue for showing their work to a global audience.”

The award-winning short films that comprised the showcase were created by up-and- coming filmmakers from the United States, Canada, Mexico and India. They included:

After arriving, the group was introduced to the Kodak team at the festival who were available to assist them. The filmmakers were also taken on a tour of the festival and treated to dinners and lunches that presented networking opportunities, both with professional filmmakers and peers. One such luncheon was arranged with producer Steve Shor of Shor Films. Prior to starting his own production company, Shor worked at TriStar and Columbia Pictures in various roles. He offered valuable insights into the business of filmmaking, related several experiences, and answered questions.

Premiere, red carpet screenings also gave participants of the Kodak Emerging Filmmaker Program a chance for star treatment and a sneak peek at the upcoming Coen brothers film No Country for Old Men and Chacun Sur Cinema, a collective of 33 short films by different directors relating their feelings about cinema.

Another component of Kodak’s initiatives in support of the next generation of filmmakers at the Cannes Film Festival involved a selection of interns who worked at the Kodak Pavilion. These cinematography and directing students were chosen by their mentors at the Ecole Superieure de Realisation Audiovisuelle (ESRA) Film School in Nice, France. Through their internship, the students were able to interact with filmmakers from around the world, and learn more about how the industry functions on a global scale.