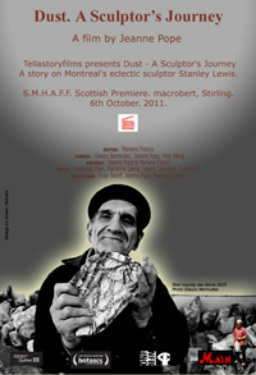 Dust, A Sculptor's Journey , Film Poster, Photo Glauco
Bermudez
​
Stanley always told me to take my working tool with me - my camera - and to always create. “Walk with creation in your mind, surround yourself with art, walk forward, and fall in love with your own work.”

And so, years later, as I walk along the beach in China, from the film school where I work, I think of his words, I think of him often. The first film I screened in the auditorium was Dust, A Sculptor’s Journey. We had a two hour discussion afterwards. One of the students later told me, having visited Montreal later that summer, that she hunted out his studio.

I often get random emails from people around the world who happen to stumble on the website. One was from a rabbi in New York who asked me if he could screen Birth of the Smoked Meat in the synagogue. Later he sent me an invite, herrings and vodka served afterwards!

I quote Stanley to my students, I tell them his stories. I walk, my hand spiritually in his, and remember those moments when he taught me what art was, sitting at the Main Deli, over his favourite smoked meat sandwich, half fat, drinking his cherry soda.

I sometimes have dreams that he comes by for a chat; they are never bad, often funny, a continuation of what we wanted to continue. What he wanted, what I wanted, friends had wanted and tried so hard to obtain, a retrospective, the Stanley Lewis Big Bang Show.

I got a phone call today from Carina Rose, an old friend who was pivotal in our friendship. Maybe, just maybe, it will now fall into place...

​Here is the first draft of the synopsis of Dust: A Sculptor's Journey

​This was the original story, and it did not end up being this story. However, the story will be written using his letters to his mother.

Documentary Summary
This feature length documentary reflects the conflicted life of Stanley Lewis, the visionary and quixotically innovative Montreal sculptor who gave up his public career in the mid eighties to concentrate on stone sculpting. He lived out his final years in a dusty studio above L. Berson & Fils, Monuments, the Jewish tombstone engravers. This humanistic retrospection of an artist’s complex life from heights of greatness and unhappiness to self-imposed exile and happiness is concurrently a quest to posthumously bestow recognition upon Stanley as the great Master sculptor he was, whilst discovering his art piece, the magnificent Pink Lady, which disappeared after his death.

The Synopsis
The documentary opens in Stanley’s Montreal studio. “We have no telephone, email or computer, do we Stanley?” says Ryan Larkin, homeless animator and Stanley’s comrade-in-arms. The tiny space is littered with sculptures while bin liners are crammed with photocopies of his past achievements. Yet nothing surpasses the sophistication of the Pink Lady, Stanley’s prized sculpture created in Florence, Italy. “I just bought this marvellous and rare pink marble at the Maiano marble quarry,” he writes to his mother in 1957. This snippet begins the creative chronology of the sculpture which is slowly unravelled throughout the documentary rousing expectation and uncertainty. The Pink Lady will also pivot as the central motif, the backbone to the story. Stanley loves her, is proud of her, and anyone who knew Stanley and visited his studio in these last years knew the Pink Lady.

Commencing in Italy where the Pink Lady begins her life, specific themes are selected which illuminate Stanley the man and artist along with the dominant motifs of his life: artistic rejection, social isolation, brilliance and mental fragility. We discover more about the Pink Lady - how much money she was valued at; how she was crated from Italy and stored at Stanley’s mother’s, how she was exhibited in his first show at the Museum of Fine Arts in 1959, and how Irving Stone - the American writer who hired Stanley to be his technical advisor on his novel The Agony and the Ecstasy - tried to buy her, and how she reincarnated, becoming politicized in the nineties, representing the abstract theme of a divided Montreal. Arriving once more at Stanley’s death we now know that his creative innovations wrought with blood, sweat and tears have vanished, which gives the story a certain edge; and as the Pink Lady vanishes she becomes almost mythical.

Nothing was simple in Stanley Lewis’ life, and this documentary will follow a similar route as it turns us round; compelling us with comedy, beauty, tragedy and suspense - all that befits a true modern urban drama - with a finale which should, hopefully, bring redemption to Stanley’s soul and the honour he so longed for. My major challenge will be how to explore the many paradoxes of Stanley’s life. I want a celebration of his life, not a commiseration. This film will reflect his art, originality, humour, life and friendships. I want the viewers to feel privileged to meet him, fall in love with him and, leaving him, go and find out more about him. If they do this, then I will know that I have done my job, and done it well.

This documentary is an intimate portrait of a friend and artist, yet the intention is to make it meaningful for a broad, diverse audience. I do not want it to be pigeonholed as an art film per se. I want it to be universally accessible, enjoyable, as well as educational.
It is quintessentially a Montreal story with the city’s stamp upon it, with a subject who is engaging and recognizable; one of the landmarks from the Boulevard St Laurent of whom so few remain. This makes it nostalgically Montreal born and St Laurent created, yet it has the larger universal theme of appropriation, poverty, and the familiar story of the naively talented artist trusting the wrong people, only to become recognized after death. Parallels can be made with other artists.
​
The documentary will hopefully resonate with art lovers who will be able to discover this socially conscious artist. I believe it can also be educational and informative, as the work is entwined around Stanley’s musings and explanations on carving, polishing, sculpting. I believe that it could be used by museums – those which already house his work – and sculpture departments throughout Canada. I believe it has a potential to travel internationally. I intend to have subtitles in French and would like to try and have it distributed for broadcast here in Canada and internationally.

Aesthetic Approach
​
The small block between Bagg Street and Napoleon is Stanley’s haunt where he is constantly on the move and, like The Boulevard St. Laurent itself, ever-changing. Video captures Stanley’s reality perfectly, allowing an intimacy between him and the lens. I would like to treat the video footage with the simplest colour correcting as I want to keep the oddly unbalanced light in his studio and the over/under de/saturation. The montage will be simple slanting towards minimalism. Part 1 is mainly cinéma direct in style and context. I used a 1 chip DVCAM to work with, which was all I had at the time when shooting Stanley. I am really pleased about this now as the video image has quite a bit of grain and captures Stanley’s studio, which was raw and stone dusty. It sets a tone and atmosphere, which will remain even if an HD transfer is required.
The hybrid patchwork of media will be selected from 16mm, still photographs, digital video footage, super 8 footage, and rich audio recordings of Stanley, line drawn and cardboard cut-out stop motion animation. There will be a hands-on and organic feeling emanating from the screen.